I saw Attack of the Killer Tomatoes many years ago and don’t remember much about it other than not particularly liking it. As a result I didn’t go into this movie expecting much and even with my lowered expectations I was wildly disappointed by this movie. 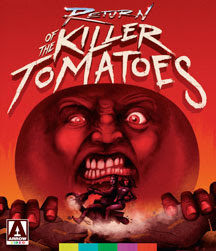 The movie takes place many years after the first one and the world is now tomatoes free and they are only available on the black market. A mad scientist (John Astin, The Adams Family 1964) has discovered a way to transform tomatoes into whatever sort of person he wants by adding some chemicals and playing music. He makes everything from huge shirtless Rambo types to his lovely assistant (Karen M. Waldor, Cannibal Woman in the Avocado Jungle of Death 1989) who eventually escapes and goes to a local pizza guy, Chad (Anthony Starke, Nowhere to Run 1993) for help.

I was immediately annoyed by the movie because it starts like a Creature Feature or Elvira movie with a host introducing the film. This gimmick is rarely done well and unfortunately it was not accomplished here. After the opening shenanigans we get to the actual movie and it starts off somewhat promising but never ends up pulling off what it was trying to accomplish. And unlike its predecessor, unfortunately, there is no giant killer tomatoes.

Really the best part of the movie is George Clooney who plays Chad’s best friend. It’s amusing to see him so young and with such a ridiculous hair cut but it’s also seems like he had fun making the movie.

The 2k transfer is good but it’s really nothing to write home about. There a few overly grainy parts and I probably wouldn’t have 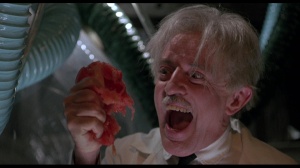 noticed so much if I had actually been enjoying the movie.

This disc is not heavy on the special features but we get a brand new audio commentary with writer-director John De Bello and a brand new interview with star Anthony Starke. The interview with Anthony Starke was an incredibly pointless interview that really just had him talking about hanging out with George Clooney. It also comes with a reversible sleeve featuring original and newly commissioned artwork by Matthew Griffin and a fully-illustrated collector s booklet featuring new writing by critic James Oliver.

Overall this is my least favorite Arrow release and one I most certainly won’t watch again. Again, I don’t really remember the first one but I imagine that if you liked that one you’ll probably get a kick out of this one. Otherwise I’d steer clear of this release and that pains me to say because I so truly love Arrow’s releases.