Kate, played by Jo Johnston, is a feminist, hippy, journalism student who infiltrates the schools cheerleading squad in order to write an expose

on the how cheerleading degrades women. While digging up dirt on the whole football/cheerleader culture she discovers a plot by the coach, the dean, and a math teacher to fix the games in order to win big money. Along the way Jo discovers that the cheerleaders aren’t all bimbos and realizes her hippy boyfriend is a scumbag.

I’m a big fan of Jack Hill. Spider Baby is one of my all time favorite movies. The Swinging Cheerleaders is a very different type of film. It fits in with the goofy sex comedy genre but unlike other classic sex comedies, such as Porky’s, there is much less emphasis on the sex. There is definitely a fair share of breast and we get a glimpse of male bush but that really isn’t what the movie is about. There is a great scene which Jack Hill talks about in the special feature in which one of the football jocks beats the snot out of a hippy. It’s quite 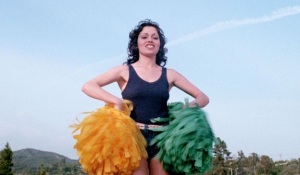 The brand new 2K restoration from original film materials is decent but not great. A lot of the football scenes in the movie are particularly bad but I think this was probably just because how it was filmed. Overall nothing to write home about.

As for special features there is an audio commentary by writer-director Jack Hill, recorded exclusively for this release. Then we have a brand new 8 minute interview with Jack Hill in which he talks about his carrier. Nothing new here if you’re a fan of Mr. Hill but interesting for the casual viewer. Next up is an archive interview with cinematographer Alfred Taylor. This is extended parts of an interview he did for the Spider Baby DVD. It’s has some interesting facts but boy is he boring to listen to. There is also an archive interview with Hill and Johnny Legend. If you know and like Johnny Legend, then you won’t be disappointed by this. In true Johnny Legend form this interview is not very conventional and is basically a fan interviewing Jack Hill. It is also

the most interesting interview on the disc. Rounding out the special features is Q&A with Hill, and actors Colleen Camp and Rosanne Katon recorded at the New Beverly Cinema between a double bill of Switchblade Sisters and The Swinging Cheerleaders. The Q&A is quite interesting, but I recommend listening to it and not watching it. It is recorded from the audience with audience members frequently framing the screen and the shaky camera work which tends to get nauseating. Think of a parent filming their child’s recital while drunk. Also included on the disc are TV spots and the usual reversible sleeve featuring original and newly commissioned artwork by Graham Humphreys.

Overall the movie is goofy and is worth a watch if you’re a fan of the genre or a fan of Jack Hill but otherwise I’d say it’s safe to skip it. If you are a fan of Jack Hill, I highly recommend it just to see the range of filmmaking that Mr. Hill produced throughout his carrier.