FRANCESCA is a new giallo film from Argentinian brothers Luciano and Nicolás Onetti (Sonno Profondo, 2013). The film, which made its world premiere at SITGES Film Festival in October 2015, is now coming to home video courtesy of Unearthed Films and MVD Entertainment

It’s been 15 years since the disappearance of little Francesca, daughter of the renowned poet and playwright, Vittorio Visconti. The community is stalked by a psychopath bent on cleaning the city of “impure and damned souls”. Moretti and Succo are the detectives in charge of finding the killer of these “Dantesque” crimes. Francesca has returned, but she is not be the same girl they once knew.

FRANCESCA can be ordered now at the  MVD Shop or on Amazon.

A young girl on vacation in Egypt is given a mysterious charm, causing her archeologist father to be struck blind inside an unexplored pyramid tomb. But when the family returns home to Manhattan, a plague of supernatural evil and sudden violence follows. Can this ancient curse be stopped before it is unleashed on the streets of New York City?

Christopher Connelly (1990: THE BRONX WARRIORS), Laura Lenzi (THE ADVENTURES OF HERCULES II), Giovanni Frezza (THE HOUSE BY THE CEMTERY) and Carlo De Mejo (CITY OF THE LIVING DEAD) star in Italian shock master Lucio Fulci’s bizarre horror thriller, which combines elements of THE EXORCIST, THE AWAKENING, POLTERGEIST, and more. Also known as EYE OF THE EVIL DEAD and POSSESSED, MANHATTAN BABY has been newly transferred and fully restored in 2K from the original uncensored camera negative and comes fully loaded with exclusive new Extras produced for this release! 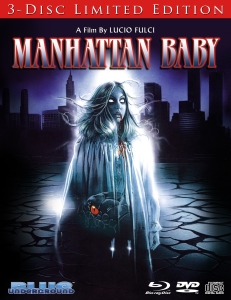 After a fashion model dies while having an after-hours abortion, someone is hell bent on revenge. The murders start with the doctor who performed the abortion and from there onto everyone associated with the Albatross modeling company. No one is safe.

While no one in this film is actually stripping for the killer, but that doesn’t mean there is no nudity. Strip Nude For Your Killer is packed full of nudity which mostly comes from genre favorite Edwige Fenech (The Strange Vice of Mrs. Wardh). But this film is much more than that, it is a stylish giallo that also has some fantastic and violent kills. It also has one of my favorite killers in any giallo, dressed head to toe in black leather and wearing a black motorcycle helmet armed with only a single switchblade and vengeance!

The film has a reputation for being sleazy, but I don’t see it as that.

To me, Bianchi (Burial Ground) has made a beautiful film that may have a few strange and sleazy characters, but that doesn’t warrant the entire film to be called “sleazy” or “trashy.” I feel that Strip Nude For Your Killer is a smart and superb giallo.

Blue Underground has done wonders with the transfer and sound quality on this release. It looks and sounds absolutely amazing. Not to say their DVD looked bad in anyway, because it didn’t, but it does blow my German BD and Shameless DVD out of the water! This new transfer is from the original uncut and uncensored camera negative. Extra features include Strip Nude For Your Giallo – interviews

with actress Solvi Stubing and co-writer Massimo Felisatti which was carried over from the DVD release. We also get the Italian and international trailers and a poster/still gallery.

I recommend that you upgrade your DVD, the BD will cost you less than $20.00 on DiabolikDVD.com and everyone needs more Edwige Fenech in high definition! This has been in my top ten giallo films since the first time I saw it. Those of you who may be unfamiliar with this genre of film should educate yourself a little since we are in somewhat of a giallo resurgence. With films out there like Amer, Francesca¸ Tulpa and Black Aria just to name a few. I encourage you to watch Strip Nude For Your Killer and the tons of other giallo’s from the seventies!

Over all this is an exceptional release for an amazing film. My only wish would be for some more special features. 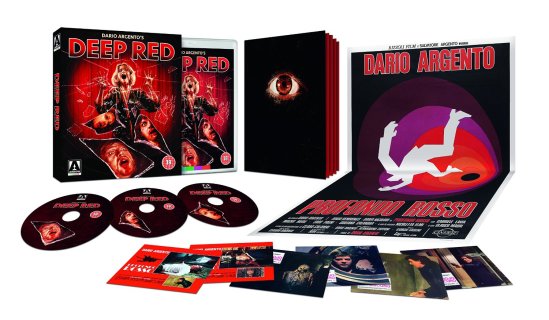 DEEP RED is my absolute favorite horror film ever made. If you listen to Exorcast then you already know this. I wasn’t overly impressed with Arrow’s packaging with this release but I will get into that a little later.

With every DEEP RED release I always hope they get better and better in every aspect. Arrow’s previous blu-ray release wasn’t the greatest. It had the awesome window box slipcase and artwork, but the sound and transfer wasn’t spectacular, which was the case with most of the early Arrow releases. Never the less I still bought them all! Aside from the HELLRAISER and VIDEODROME sets this was the first Arrow UK release I have picked up in a very long time. The Arrow US stuff has all looked amazing which gave me some hope.

So to start off Arrow gave both the international and the directors cuts of the film new 4K transfers and they do look amazing. Normally on older films I don’t care as much about the transfer because sometimes I prefer the grime, but I must say this film has never, ever looked better in my eyes. I have fallen in love with DEEP RED all over again. The picture looks perfect. It was like seeing it for the first time. The black gloves, the overly red blood, everything was perfect. The sound has also been improved over their previous release. I just couldn’t resist not to crank GOBLIN’s amazing score while watching the film. It even woke my son up in the middle of the night, bad parenting…maybe, but it was totally worth it. I have only watched the director’s cut but I can only imagine that the international cut looks and sounds just as good.

This already may be my favorite release of the year and it will be hard to top in my eyes. As I said before though I was not impressed with the packaging. Arrow has done some great packaging recently with those hard, sturdy slip cases. I feel like if any film deserves something like that, it’s DEEP RED. That is my opinion though. Most of those releases have been double features, but VIDEODROME got that release from Arrow, damnit.

This release went out of print before its street date. It sold out on preorders alone. That’s pretty intense, but you can still snag it for a decent price on eBay for around $75.00.

A full break down of the special features on the set are;

For collectors this is a must have! I would absolutely pay $100.00 for this in a heartbeat if I had too. For me it’s a great release and a must own.

This week I am joint by The Newsfinder General and the come back from the one, the only, the pumpkin faced cocksucker himself…Vincent Renfield. We are also joined by Dr. Jimmy Terror a.k.a. James Harris from – http://www.docterror.com – to help kick off Italian Horror Week III on his site by reviewing some Italian horror films! We decided to go for some of the less talked about films, so first up is Mario Bava’s Shock (Beyond The Door II), Francesco’s Barilli’s The Perfume of the Lady in Black and the newly released (but not in the USA) Tulpa (Perdizioni mortali) directed by Federico Zampaglione! We also take a look at the newest released from One Way Static Records with Roberto Donati’s score for Umberto Lenzi’s Cannibal Ferox (Make Them Die Slowly).