Assault on Precinct 13/The Fog

John Carpenter is easily considered to be one of the greatest directors of all time. It is an earned reputation, as he has shown that he can make amazing horror, action, and sci-fi films. Sure some of his later films were a little off (to put it nicely), but his hits make up for those.

As renown as his films are, his film scores are equally as impressive. I’ll never forget the first time I rented Halloween, and hearing the theme song for the first time. I knew I was watching something great, based on the opening music.

Recently John Carpenter and a live band, have gone on tour performing these classic themes, along with new stuff from the Lost Themes albums. I (and Exorcast CEO The Beard), got to see his stop in Pittsburgh. The performance was great, and getting there was an adventure. 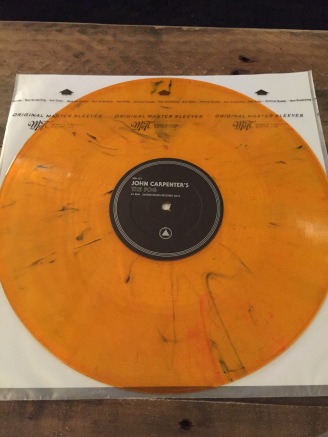 Both releases are played at 45 rpm, and sound great. Everything sounds clean and crisp. Both Assault and The Fog sound really close to their original score. They both sound more fuller, but it isn’t a drastic change. The same can be said for Escape from New York. Halloween on the other hand, really benefits the strongest from the band.

There has been some terrible renditions of the Halloween theme over the years, like the rock guitar version in the theatrical part 6, or the orchestra version in H20. Neither worked, but with this release, this is the best Halloween has ever sounded. Yeah, even against the original. The theme really benefits from the dual keyboard approach and added drums. I don’t know the extent of Carpenter’s involvement in the new Halloween, but they must use this version of the theme.

Even though the other themes don’t sound that different, that doesn’t mean there isn’t improvements. Escape has always been a bluesy rock track, but now is more dynamic. The Fog is just as creepy as it was in the film. Like Halloween, Assault comes in with a two keyboard attack and drums.

The packaging is also very well done. The front and back show a different image related to one of the films, done in black and shiny silver.

So with these being the best sound versions of the themes, these releases are a must have right? Yes and no.

These were both released on the same day and are a little expensive. Preordering I was able to get them for around $16 each. That comes out to $8 a song. Personally, I didn’t notice anything that really would have hurt these being combined into one release. They were selling different colored editions of these singles at the concert, but were $20 each. I know vinyl isn’t cheap, but I just want to give everyone a heads up what is on these.

So again while these are phenomenal releases, they are pricey, but they are the best sounding versions of the themes. While I don’t regret picking these up, and will get others if they are released, just know you can get the Lost Themes I or II for $19 each on Amazon. Those have more tracks and are longer length releases.

If you do pick these up, you will not be disappointed. Also if you get a chance to see Carpenter in concert, definitely don’t pass that up.

When not reading Sutter Cane or Exorcast reviews, you should read my Twitter feed @cerial442.