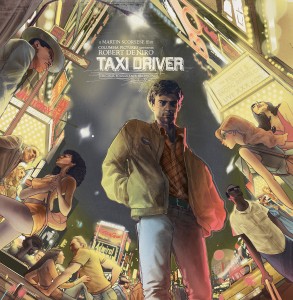 We are in a vinyl resurgence, but it has been going on longer than you think. Especially if you are into punk and hardcore. The soundtrack boom however, is more recent. One of the label’s that had a hand in this is Waxwork Records. I learned about Waxwork due to their Chopping Mall release. I’m not a fan of the film, but the artwork and the hot pink colored record, felt like something I must have. That’s what made me a fan of theirs, and currently own all of their releases.

Waxwork as a label has gotten bigger and bigger. Having released soundtracks for films such as Friday the 13th, Trick ‘r Treat, and Goosebumps. Another huge release for them is the subject of this review, the soundtrack to Martin Scorsese’s masterpiece Taxi Driver.

The Taxi Driver score is conducted by Bernard Herrmann, famously known for his score to Psycho. Taxi Driver was his final score before his death. The score is haunting and really adds to the despair we experience with Travis Bickle. It’s downbeat and ominous, and really sets the tone of the film. While it is not really a soundtrack you would put on for a fun listening evening, it is great to listen to on a rainy somber day, waiting for the sun to shine.

This release from Waxwork shows why they are one of the best soundtrack companies around. The score is presented on two LPs, each being 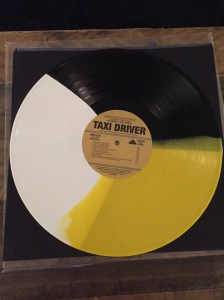 180g. This was released on two different color options; a taxi cab yellow, and a white, yellow, and black tri-color. The tri-color one is the one I picked up, but both look amazing. The release sound really good, as well. Many will argue over the benefits of 180g vinyl, but I’m in the camp that states it does sound better. It sounds clean, real clean. Clean like my conscience.

In addition, this is the first time the score has been released in it’s entirety on vinyl.

So with the complete score, great sound, and a good looking LP, that should be enough right. Waxwork always goes above and beyond for their releases, and this one is no different. The artwork was done 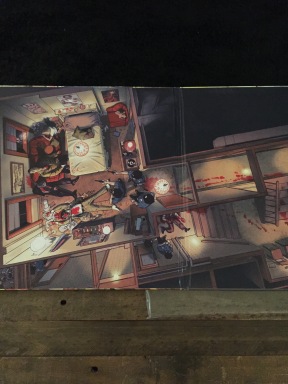 by Rich Kelly. We get gatefold artwork depicting one of the more bloodier scenes, that would be great on it’s own as a poster. Finally, we get liner notes by Martin Scorsese himself.

So listen you screwheads, if you are a fan of the film, you need this release in your collection. This is the definitive version of the soundtrack, it sounds great and has fantastic artwork. Suck on this.

By the time you read this, I will hopefully not be dead. You can also listen to me twice a month on the CinemaVillainy podcast.