The name Jorg Buttgereit is infamous in the horror genre. Known the world over for being a shock filmmaker, with gory and disturbing films, yet his gritty, stylish form of filmmaking has a much overlooked artistic value to them. Jorg often gives his characters a realistic life struggle like depression or schizophrenia but a lot of the time these things are over shadowed by murder and necrophilia. With that being said there is a lot more to Jorg’s films than just corpse fucking. The four films in this set which are his most well known and most notorious movies are some of

the most sophisticated and artistic that the genre has to offer, in my opinion. I believe he and his films really paved the way for some of the more shocking films you see today such as The Human Centipede series. I am fairly positive that without Jorg a lot of this stuff wouldn’t be out today.

Thanks to Cult Epics, Jorg’s four standout films; Nekromantik, Nekromantik 2 Der Todesking  and Schramm are now available on BD in the U.S. for the first time. Cult Epics has released all four individually over the last year or so. But if you haven’t picked up the individual release you can 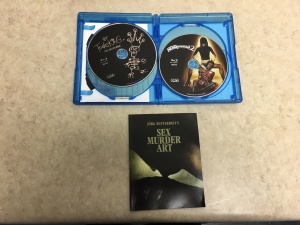 snag this killer set. I am not going to review each film because we have already done so on Exorcast.

Sex Murder Art: The Films of Jorg Buttgereit is a four disc BD set containing; Nekromantik, Der Todesking, Nekromantik 2 and Schramm. You get the soundtracks of all four films in a 2 CD set, also included is a 40 page book with an introduction by Nico B. of Cult Epics, interviews and exclusive images.

This is one of those sets that every horror collector needs in their collection. All four disturbingly beautiful films in one place, uncut and uncensored. The set will only set you back about $65.00 on 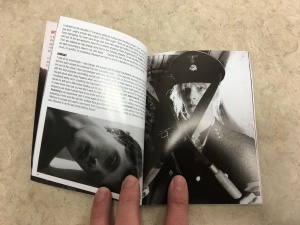 DiabolikDVD.com. Well worth the price of admission for all that you get.

Nekromantik tells the story of Rob (Daktari Lorenz) who works at a street-cleaning Agency, and visits roadside accidents to clean up the scene. Incidentally Rob collects the body parts and shares them with his girlfriend Betty (Beatrice M.) When Rob presents a complete corpse taken out of a swamp, their undying love reaches its peak, but soon after Betty gets a more liking towards the corpse and leaves Rob, which takes him to the sick end of his destruction.

From director Jorg Buttgereit comes Nekromantik 2, the gore horror sequel to his 1987 classic Nekromantik. Monika (Monika M.) is a beautiful necrophiliac who lives alone in Berlin. By day she works as a nurse. By night she prowls through cemeteries while searching for fresh corpses. When she reads about the suicide of Rob (Nekromantik’s Daktari Lorenz) she finds his grave to dig up his body and brings it home. Mark (Mark Reeder) lives across town and makes his living dubbing “sex films”. After meeting Monika, romance blossoms and they fall in love. But all is not well in Monika’s world. Her relationship with Mark begins to falter and she has to make a final choice between loving the living or the dead.

Cult Epics presents the third release in the series Corpse Fucking Art; Jorg Buttgereit’s powerful masterpiece Der Todesking (aka The Death King), made in between Nekromantik (1987) and Nekromantik 2 (1991). Seven stories on Death and Suicide, each taking place on a different day of the week, enframed by the decomposition of a human body.

SCHRAMM The story of a deranged serial killer from the director of Nekromantik. Lothar Schramm (Florian Koemer von Gustorf) is dying, face down in a pool of his own blood. Behind his closed eyes, fractured memories repeat themselves. He runs by the sea. He lusts after the whore (Nekromantik 2’s Monika M.) across the hall. He staggers through life uncertainly. He kills. Schramm is the story of the notorious “Lipstick Killer” Lothar Schramm’s last days on earth. Revealed in a series of tightly constructed flashbacks, the film offers an unflinching look into the mind of a serial killer. Uncompromising in its depictions of violence and perversion, Schramm is a poetic masterpiece of horror guaranteed to make you squirm.