You don’t have to go to Texas for a chainsaw massacre, quite possibly my absolute favorite tag line. This is one of those titles that I and probably all of you have been dying to get a release since Grindhouse started releasing blus. Well, it finally happened and I am not the slightest bit disappointed despite having to wait about two years for it. The transfer looks fantastic! Better than I could’ve dreamed. I have a German hardbox blu-ray and the picture quality is shit! It’s worse than the original Grindhouse and Arrow UK DVD’s. Not that they looked bad, this particular BD was just up converted from a terrible looking DVD source. This new transfer though, it is stellar! 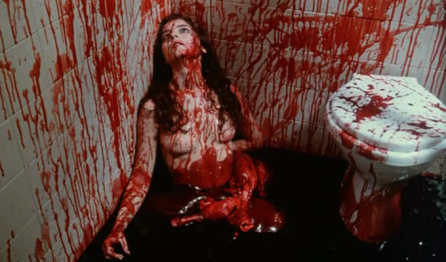 This two disc blu-ray set comes with both versions of the film; the original, unrated U.S. cut (83mins) and MIL GRITOS TIENE LA NOCHE, the uncut directors cut in Spanish (86mins). There is a new commentary track with Jack Taylor and in-depth interviews with director Juan Piquer Simon. My favorite feature is the new documentary 42nd STREET MEMORIES with interviews from William Lustig, Larry Cohen, Jeff Lieberman and Lynn Lowry just to name a few. This doc is excellent and should be one of the first things you watch, after the film of course. The third disc is the original soundtrack by Stelvio Cipriani, Carlo Maria Cordio and Fabio Frizzi!

As some of you know the first 2000 copies came with a replica jigsaw puzzle from the film. I purchased mine from DiabolikDVD who stated that if you preordered by a certain date you were guaranteed a puzzle. I knew this not only because I am a regular shopper of their site but because I read the press release that Grindhouse Releasing released

and it stated that you could preorder directly from DiabolikDVD and gave the web address. Some people missed that memo so they bitched and moaned on YouTube about it and looked like a jackass.

Puzzle aside, this is a must own release! One of the best slashers from the 1980’s in my opinion. It’s fun and gory, a four star film and if you’ve never seen it before just do yourself a favor and go buy a copy. Hell, you may still get a puzzle with yours and you can brag online about it.