It’s 1974 and young twins Todd and Terry are at the drive in with their mother and her male companion. While mom is preoccupied with some necking, the twins sneak away. They come upon a couple going at it in the back seat of their car, when without warning Terry hacks the man to death with a hatched. Terry then gives his brother the murder weapon and accuses him of the murder. As a result, Todd is institutionalized while his murderous brother goes free. Ten years have passed and on one fateful Thanksgiving Todd escapes the institution and the murdering starts up once again.

This slasher is one of the few that has escaped me in my many years of horror movie watching and boy it was a treat that Arrow Video introduced me to it. Directed by John Grissmer (Scalpel 1977) and Penned by Bruce Rubin (Zapped! 1982), this movie has everything you could ask for in an 80’s slasher. With an awesome synth soundtrack, ample nudity (first boob is 4:10 in), Ted Rami hustling condoms and tons of bright red blood and ridiculous kills, this movie hits all the bases. The star of this flick is Mark Soper (Graveyard Shift II 1988), who plays both Terry and Todd. As Terry he is a cocky asshole who loves to hack and slash. As Todd he is a timid misunderstood dweeb. Most of the kills are done with a machete, the best being a woman who gets cut in half at the waist and while she’s laying on the ground in two pieces, she lets out a long scream before finally dying.

As for Arrow’s release of the movie, they continue the excellence that they are known for. The limited edition 3-disc set is beautifully packaged with a slick slip cover and new cover art, and as usual the original artwork is on the reverse side. There is also a great collector’s booklet that is 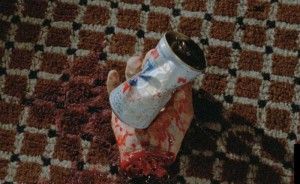 written by Joseph A. Ziemba. The first disc includes the 2K restoration of the “hard” home video version. There is also a commentary with the director, lots of interviews and a featurette that revisits some of the original shooting locations. My favorite of these featurette’s is Man Behind the Mayhem, which is an interview with the make-up effect artist, Ed French. I’m a sucker for hearing gore effect artist talk about their work and this doesn’t disappoint. There is also alternate opening titles and a still gallery.

The second disc is the same as the first except on DVD. The third disc which is limited edition exclusive has the 1987 re-edited version of the film that was done for theatrical release under the alternate title, Nightmare at Shadow Woods. It also has a composite cut which combines the two versions of the film and some outtakes.

I highly recommend picking up this movie. I’ve already watched the two different versions of the film and I’m positive I’ll be watching it many more times. Definitely get the limited edition while you still can so you can see the re-edit.