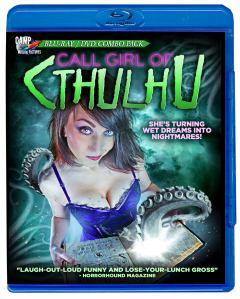 “finds all sorts of sexy, splattery, silly ways to riff on the eldritch author while still bearing an underlying reverence. It’s an unabashed, full-throttle exploitation film, yet one that it’s easy to imagine Lovecraft himself getting a good giggle out of” – Fangoria

Carter Wilcox (David Phillip Carollo) is a struggling artist who’s been saving his virginity for someone special. When he meets the enchanting escort Riley Whatley (Melissa O’Brien), he believes he’s found the one. Unfortunately, she’s also “someone special” to an ancient cult that believes she is the chosen bride of their alien god, Cthulhu.

Forced to mate with their tentacled deity, Riley becomes a vessel for the spawn that will destroy mankind.

Now, Carter and his noise musician roommate, Erica Zann (Nicolette Le Faye), must battle the sinister cult and unimaginable creatures to save Riley… and the rest of humanity.

Will they save the world or surrender to the slimy grip of the Great Old Ones?