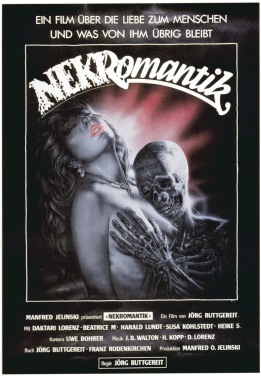 Arrow Video is extremely proud to unveil not one but TWO as yet-unannounced forthcoming titles! SUBMITTED FOR YOUR APPROVAL: from the master Italian schlock, Ovidio G. Assonitis, the barmy 1979 sci-fi horror mash-up THE VISITOR and – for the hardened cult movie freaks amongst you – the infamous 1987 underground German shocker NEKROMANTIK!!!

For those of you who’ve been living under a rock in recent months, THE VISITOR is the ultimate experience in B-movie madness from Ovidio G. Assonitis, shlock producer extraordinaire and director of such deliciously guilty pleasures as Beyond the Door and Tentacles. Described by various sources as “one of the most mind-altering cinematic experiences of the 1970s” and “the Mount Everest of insane ‘70s Italian movies”, THE VISITOR brings together an astonishing ensemble cast (Lance Henriksen, Shelley Winters and Mel Ferrer to name but a few) in a hallucinatory intergalactic tale of a demonic little girl and her pet hawk. In the words of one astute reviewer, THE VISITOR is “the most fun you can have in a movie theatre without risking permanent brain damage”!

Next up on the chopping block, it is with immeasurable pleasure that we can finally announce our upcoming release of Jorg Buttgereit’s inimitable girls (and guys!) ‘n’ corpses flick NEKROMANTIK. Never released on home video in the UK (distributors didn’t even dare submit it for classification), NEKROMANTIK plunges the viewer into a depraved world of nihilism and necrophilia – weaving the tale of Rob, a young man who finds himself competing for the affections of his girlfriend with a putrefying cadaver. So prepare yourself for Arrow Video’s full, uncut version of NEKROMANTIK – the film once seen, never forgotten!

What’s more, we’re deliriously happy to reveal that both films will form part of the core programme of this year’s SCALARAMA, which was unveiled last night at the inaugural event in London’s Horse Hospital. Over the month of September, SCALARAMA will bring together screening venues up and down the UK in a nationwide celebration of all things cinema! Keep your eyes peeled – screening details (as well as more title-specific news) to follow.

Trailer for The Visitor